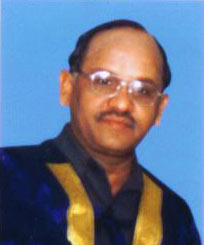 A Gold Medallist from the Madras University, he graduated with Honours in Electrical & Electronics Engineering. It is probably his deep-rooted academic interest that fuelled Dr.R.Vasanthakumar’s endeavours in the field of education.

Besides education, Dr.R.Vasanthakumar is a renowned name in lending his assistance to philanthropic causes. His contribution to temple maintenance and renovation of dilapidated temples is priceless. He has renovated and consecrated more than 300 Shiva temples that are mainly in villages with old granite structures and is maintaining daily poojas in those temples. He has also been instrumental in incepting the Panniru Thirumurai Aaivu Mayyam which is involved in Research of Ancient Tamil Saivism Literature like Thevaram, Thiruvasagam & Saiva Siddantham and spreading Saivism by conducting conferences and seminars once in 2 months. His Tamil Chairty wing has undertaken the million rupee five year project to identify, sum up and list the total number of words available in Tamil language from the Imperial Age till date.

Dr.R.Vasanthakumar’s noteworthy contributions have been rightly commended through several titles and recognitions. An Honorary Doctorate conferred on him by the Avinashilingam University in 2004 stands testimony to his role as an exemplary academician and an extraordinary philanthropist. NIA Institutions, Pollachi has awarded the title “Kongu Nattu Sathanaiyalar” on the occasion of the 51st Founder’s day of Shri. Nachimuthu Gounder. He has served as President, COSIEMA (Coimbatore Sidco Industrial Estate Management Association) during 1998-2000 and Tamil Nadu Private College Management Association (Coimbatore Chapter) 2000-2002. He is also the President of ENFUSE (Energy & Fuel User’s Association), Coimbatore Chapter and RENOVATION Committees of various SHIVA Temples. He is the Governing Council Member of Sri Ramakrishna Mission Vidyalaya Polytechnic College, Sri Dhandayuthapani Polytechnic College and Thavathiru Santhalinga Adigalar Tamil College.

Dr.R.Vasanthakumar’s extensive travelling has taken him around the world, primarily to the United States of America, Germany, Italy, Turkey, Japan, Malaysia, Singapore and Switzerland. His rich experience and expertise continues to be a source of great inspiration to one and all.

Journal of Computer Science and International Journal of Applied Mathematics is published by R.Vasantha Kumar and owned by/on of Karpagam Charity Trust and Published from 14-A, L.I.C colony, SIDCO, Kurichi, Coimbatore – 641 021.

Papers are invited for the JCS Important Dates Last Date for Submission of Article: 30.05.20 ...
﻿